The Reality of how to Manage a Career

The shelves of career planning books in the self help section of bookshops, present a dilemma.  Most successful people I have coached would claim that they have never planned their career.  Those who claim that they planned their career, then point to some disjuncture which threw the plan off course. Or even worse, they say that following the plan stopped them assessing whether they wanted what they were creating.  They achieved their goal and than asked themselves ‘Is that it?’.  Yet at the same time, we are encouraged to believe that planning is the key to success.

Planning is logical, but the world is not.  If individuals were predictable, if rational thought was the only basis on which we made decisions, if performance was the only predictor of success, if organisations were in complete control of their own destiny then planning would make perfect sense – but none of the above are true.  So those who are successful in achieving careers which are satisfying and which engage their skills and motivations, and which attract the rewards which matter to them, are not  career planners, but they are skilled career managers. 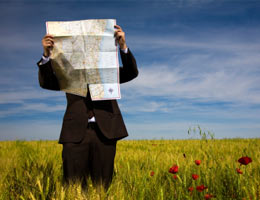 The dangers of trusting a career map

What is the difference?  It is not mere semantics.  To manage is according to dictionary definitions, the ability to guide, conduct, treat with care.  To manage is to have a sense of ownership for something which you treat with respect, because you want to make the best use of it. In career terms, it means that you may not be able to predict the eventual outcome, but you can navigate the journey with  care, so that wherever it takes you you will land well.

My experience of those who have careers which deliver what they want, is that they have navigated their journey with skill, and they have done this by being able to hold multiple perspectives simultaneously in considering their career.  By doing so they display a degree of career intelligence that is often missing from those who adopt the ‘In five years time, I will be . . ‘approach.

Management guru,  Charles Handy, once described the ten year career plan he was offered by the oil company he was working for. It promised him that given he performed well, 10 years on he would be in a role heading up a division in an African country.  ‘Ten years on, the role did not exist, the division did not exist, and the country did not exist’.  The danger of the career plan is that it exists carved in stone, unconnected to what is changing both around and within the individual.  Never has the danger of career planning been more evident than at the moment, as we watch well known names implode and new names appear.

So what are these multiple perspectives that allow individuals to have careers that flourish regardless of the unpredictability of the external world.  I believe there are four key abilities that some are born with, and some learn along the way.  They are:

Scenario awareness is the ability to lift your thinking beyond the immediate demands of your role, and the current state of play in your organisation, and to look ahead to see what is coming into view that could impact on how your organisation operates.  It demands an openness to look not just at the current business climate, but to consider what broader trends could impact on how your business operates, and what that could mean for opportunities.  It is the difference between seeing the future as an incremental advance on the present, where it is the success of your current strategy which will shape your career opportunities, and a willingness to consider ‘What if . . .?  By posing the ‘what if . . .? question, both the unlikelihood of the future being a mere extension of the past, and the possibility of new career options opens up.

A follow on from scenario awareness is an openness to looking at the currency of your skill set against the emerging environment.  It is obvious that change has removed many roles which once provided paid employment.  From the disappearance of the bus conductor to the death of the tea lady; but we are often less attuned to the shifts in business focus or the demands of a new role which mean that our currency exchange rate is re-evaluated.  We become attached to particular skills because they bring personal satisfaction, but risk losing sight of when their value is declining in our particular context.  Those who are skilled career navigators regularly assess their currency rate, and if it is decline, they either look for another place where those skills are still needed, or they are willing to shed skills and acquire those which have greater currency.

Self management is about understanding your self, and in particular understanding your own strengths.  Those who are successful in their careers are able to identify what it is that they do particularly well, and even more important they know where to focus that strength.  They are able to differentiate between what they can do – which may be many things, and what they do that makes the most impact.  They think more widely than organisational competences to identify what is their ‘core competence’ ie those things which differentiate them.  It may be being able to keep people motivated when the going is tough. It could be giving staff a sense of self belief that enables them to do more than they believe possible.  It may be being ‘bloody minded’ and able to keep pushing once they believe in an outcome.  Whatever it is, it probably doesn’t appear in a competency profile.  Once individuals know what their real strengths are, they are able to find those situations in which their strengths are essential to success.

Knowing that self marketing is an aspect of creating a career does not make it any more comfortable for many people.  They hold in their head an image of self promoters who network furiously, manage upwards and claim credit for anything they can put their name to.  This push model of self marketing has successes, but it equally evokes resistance.  A look at those who are skilled career managers is that their marketing is based on pulling people towards them, so that they want to buy what they have to offer.  How they do that is by listening closely to what the other person needs and wants, and by showing what they have to offer that is relevant to their need, rather than by shouting their own virtues.  They create a positive word of mouth that does their marketing for them, rather than having to expend energy on selling the message.  What they do spend their energy on is building meaningful relationships with people, and in doing good work.

So if you are reading this as someone who wants to manage their own career more effectively – ask yourself these questions: